Dominio de Valdepusa, located in the Toledo municipality of Malpica de Tajo, has belonged to Carlos Falcó’s, the Marques de Griñón’s, family since 1292. In 2002 this property was granted the first ‘pago’ Denomination of Origin by the Spanish State. In 2003 the European Union convalidated this recognition, making Dominio de Valdepusa the first Spanish estate to receive a recognition only previously obtained by legendary vineyards such as Romanée Conti (Burgundy) or Sassicaia (Toscana). Dominio de Valdepusa is a unique vineyard occupying 52ha, including the original vineyard of (14 ha) Cabernet Sauvignon which planted in 1974. Since 1991, this has been progressively increased with Syrah and Petit Verdot varieties, both pioneers in Spain, and Graciano. The main house and winery of Dominio de Valdepusa are set in historical 18th century buildings. The old Casa de Labor (Workhouse) acts as a visit centre today, includes an avant-garde design kitchen, 4 dining rooms, and tasting rooms with a joint capacity of up to 120 people, likewise Dominio management offices. The central courtyard of classic Toledan architecture like the rest of the winery houses a grape press inaugurated by the Prince of Asturias and Duke and Duchess of Lugo, where visitors can experience traditional grape pressing in the grape-picking season. The vineyard landscape includes large iberian oaks (Quercus Ilex); its paths are lined with cypresses, rosebushes and rows of lavender. Between the house and winery a botanic garden has been planted since 2000 with over 300 species, mainly Mediterranean of origin. Their current production of 350,000 bottles, advised by the prestigious Bordeaux oenologist Michel Rolland, centres exclusively on red wines produced for grapes from our own vineyards. The single-variety collection includes: Dominio de Valdepusa Cabernet Sauvignon, Syrah and Petit Verdot to which the plurivarietal Emeritus and Svmma Varietalis are added. All wines produced in Dominio de Valdepusa regularly appear in the list of honours for great Spanish wines in competitions, guides and articles by national and international experts.

Buy MARQUES DE GRINON wines from VINO&VINO wine store online and have it delivered for free to your door in Yerevan. 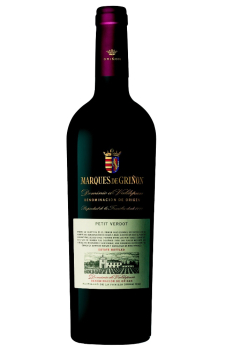