MONKEY 47 is an extraordinary gin produced by German gin enthusiasts as a tribute to Lieutenant Colonel Montgomery Collins. The production is run by Black Forest Distillers - since 2016 a part of Pernod Ricard.
MONTGOMERY COLLINS & MAX THE MONKEY: Montgomery Collins was born in Madras, India in 1909, and later enrolled in The Royal Air Force. After the end of World War II, he ended up in Berlin where he was involved in the reconstruction of the war-torn city. He was especially interested in Berlin Zoo, to whom he donated a monkey called Max. In 1951, Collins opened a guest house in the Black Forest, southern Germany, which he dubbed "The Wild Monkey". In addition to running the guesthouse, he began to produce his own quality gin consisting of the herbs and berries he could find in the Black Forest. Over time his gin was forgotten, but when the guesthouse was renovated a detailed recipe was found. A gin he called "Max the Monkey". This became the inspiration to Monkey 47 - Black Forest Dry Gin.
HAND-PICKED HERBS FROM SCHWARZWALD: Monkey 47 is not a regular gin, rather an unfiltered exotic figure with its Indian heritage and the purity of the Black Forest. Monkey 47 has its unrivaled complexity and quality from the 47 hand-picked ingredients produced in extremely soft spring water from the Black Forest. Part of the product's great attraction is the use of fresh cranberries, which gives the gin a very special character. Buy Monkey 47 dry gin online at VINO&VINO wine and spirits store and enjoy free delivery in Yerevan. 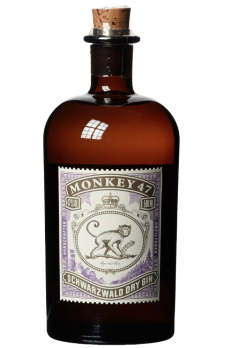