The origins of Château Ormes de Pez date back to the eighteenth century. Château Ormes de Pez is one of St-Estèphe`s leading Cru Bourgeois properties. It was bought by Jean-Charles Cazes in 1936 and is now owned and run by Jean-Michel Cazes. The latter owns Lynch-Bages situated on the edge of the hamlet of Pez in the northern part of the Saint-Estèphe commune, the property takes its names from a beautiful copse of great elm trees long since disappeared. The vineyard and winemaking techniques combine the best of tradition and modernity to give birth to harmonious wines of spicy and voluptuous character, true expressions of the terroir in their appellation. Vineyards The vineyards are located in two plots north and south of the village of St Estèphe, on the sand and gravel that is typical of the commune. There are 33 hectares in all, with 70% of the vines Cabernet Sauvignon, 10% Cabernet Franc and 20% Merlot. They have an average age between 25 and 30 years, and are planted at a density of 9000 vines/ha. Vinification/Maturation: The harvested fruit is destemmed and then vinification of de-stemmed grapes takes place in a restored stable, extensively renovated in the 1993, using stainless steel and temperature control. Malolactic occurs in vat, and the wine then sees fifteen months in second-hand barrels from Lynch-Bages, with several rackings. Barrels aren't alone in their travels between Lynch-Bages and Ormes de Pez, the Lynch Bages winemaking team, led by Daniel Llose, also looks after Les Ormes de Pez. The wine is fined and filtered before bottling. The result is Château Ormes de Pez, a firm, robust wine typical of its commune which offers good value. Buy French wine CHÂTEAU ORMES DE PEZ Saint-Estèphe online and enjoy free delivery in Yerevan. 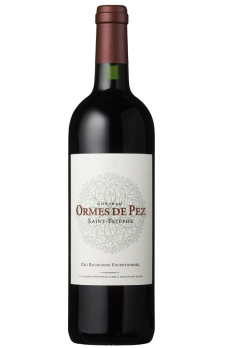