THE FIRST SINGLE CÉPAGE ARMENIAN BRANDY
Often referred as “Single Malt of Armenian Brandy”, ARTAGES is an innovative approach which challenged the 135- year-old legacy of Armenian Brandy to reveal the hidden beauty of Armenian Grape. ARTAGES is a single ce՛page (Single variety) Armenian Brandy – a unique bouquet of different spirits made of the same grape variety. Kangoun is an endemic grape variety of Ararat Valley is known for its unmatched potential of taste which can be revealed while ageing. Named “Kangoun” which literally means stable, this grape is in a creative dialogue with the brand name to glorify the impregnable fortress of ancient Armenia – ARTAGES.
The blends of ARTAGES praise the very essence of eau-de-vie as a form of memory which conveys the genuine taste of the spirits and gleams with the brightest colors of artisan mastery. ARTAGES celebrates the richest legacy of Armenian Grape, the exceptional quality of which was appreciated by Roman Emperors, whose testimonies are widely mentioned in Latin Manuscripts. ARTAGES unlocks the layers of Armenian Grapes and displays the inherited Savoir-Faire in a small batch artisan series of brandies, the range of which consists of ARTAGES 12, ARTAGES 25, ARTAGES 30, ARTAGES 50 and ARTAGES 70. Each bottle of this artisan blend is a bespoke aspiration to overcome the pastness of tradition and twist it in a modern light. ARTAGES is a story of artisans, masters of exclusively refined palate whose exceptional experience and sense of taste chosen for you the Rarest Spirits to create the most exquisite of Armenian Brandies. A new twist in the century old heritage of Armenian brandy making – ARTAGES unites the warmth of Armenian nature and supremacy of pure sensation.
Committed to uniqueness ARTAGES expresses its admiration to heritage of exceptional brandy spirits and audacity of creative minds. It is deliberate exploration of new territory of Armenian Brandy and the historically first range of single ce՛page blend. ARTAGES declares that the glory of Armenian Brandy is now enriched by a new beauty: the beauty of audacious creativity.
RTAGES is a brand-new chapter in rich history of Armenian Brandy, a new twist to satisfy those whose taste is rich enough, whose sense of appreciation of Armenian Brandy is ready to go beyond. Unlike others the organoleptic features of ARTAGES could hardly be outlined by words. ARTAGES is the infinite echo of taste that will be appreciated by every sip and long after... Creators of ARTAGES intentionally doesn’t describe the taste of the brandy by the commonly known expressions to let your sensational imagination to reveal the endless echo of heritage.
The very idea of creating the first ever single ce՛page Armenian Brandy deals with the philosophical idea of frontier, as a metaphorical limit that makes us go beyond. Back in the Ancient times ‘the border’ became the key to define different spheres of science to explore them deeper. Later the idea of ‘border’ contributes to creation of ‘music’, ‘literature’, ‘painting’ as a separate spheres of Art. The idea frontier has been poetically evolved in the notion of “purity”. The name ARTAGES is name of Ancient Armenian fortress, which reflects the idea of purity as a quintessence of ARTAGES Brandies. ARTAGES brandies bear the name an impregnable fortress to define the “pure genre” of Armenian Brandy. The uniqueness of ARTAGES brandy is hidden in the unmatched blending approach, which combines only the spirits made of same grape variety.
ARTAGES invites you to go beyond the seeming clarity and reveal the intensity of color, taste and aroma. Audacious Approach featuring Treasures of Yerevan Brandy Compan. ARTAGES is produced at Yerevan Brandy Company, the unmatched treasury of brandy spirits has been opened to execute the creative idea of ARTAGES founders. The rarest spirits of exceptional quality that have been cherished over the decades by the masters of Yerevan Brandy Company now became a palette to embody the unleashed creativity of ARTAGES. 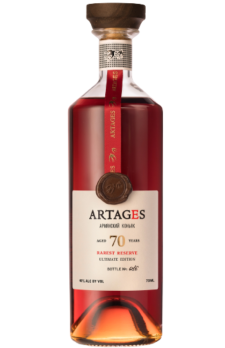 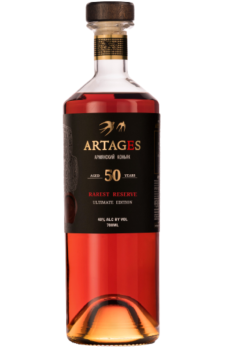 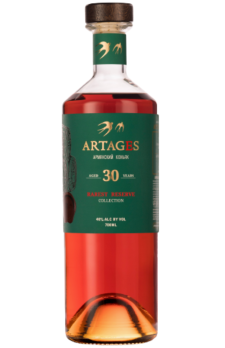 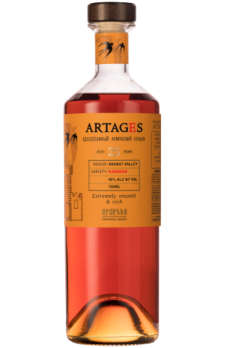 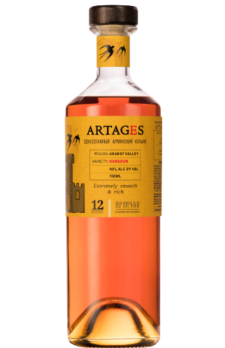